From our own vineyards, we produce Rattlesnake Ridge Zinfandel and Rattlesnake Ridge Petite Sirah. We combine our grapes with purchases from other Sonoma Valley producers to make SLATER Zinfandel. (In 2012, we again made a single vineyard wine from Dawn Hill Ranch.) Production is very limited.

All wines are now sold out!
2013 Rattlesnake Ridge Petite Sirah

2013 was a warm excellent growing season. Flavors are ripe and this year’s Petite Sirah has already uncharacteristically integrated its skin tannins. With all our wines, we keep the oak tannins light by using seasoned French oak barrels. We age for 22 months in barrel and then another 18 months in bottle before releasing. Petite Sirah’s skin tannins normally require a bit more age to smooth out. At the most recent tasting, the monster had entered a mellow, approachable period. With time, it will reassert it’s Deep Purple, more complex, big wine characteristics. No light cherry and currant notes here, it’s all dark blackberry and blueberry. It’s good drinking now, but save some for Thanksgivings through 2023. 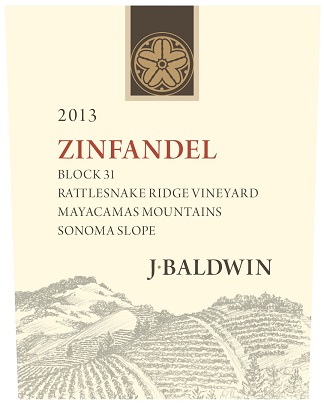 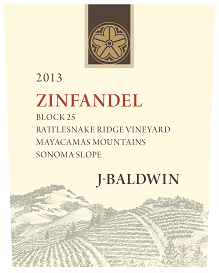 The first sensation is of full-bodied, concentrated mixed mountain
fruits, which - for whatever reason - reminds me of Montana huckleberries in late summer. As I’ve written many times, the DuPratt clone, which comprises this wine, is a long time preoccupation. With all our wines, we keep the tannins light by using seasoned French oak barrels. We age for 22 months in barrel and then another 18 months in bottle before releasing. Although it’s pleasant and approachable, decanting or a few hours of breathing — perhaps while watching music videos — will increase the complexity and breadth of flavors.

Bronze Medal at SF Chronicle Wine Competition- Not sure what the wine was doing on judgment day - I love it. JB 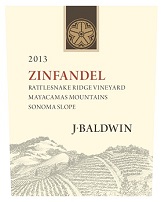 2013 Rattlesnake Ridge Zinfandel
I chose this wine to lead our new releases before it received its high accolades. It just seems  the perfect introduction to a great vintage. It has become a bit closed, so let it breathe, or decant, before serving. We chose a blend of 1% Petite Sirah and two-thirds Primitivo from Block 31  and one-third DuPratt from Block 25. The resulting black cherry flavors and blueberry aroma form a foundation for full-bodied elegance. 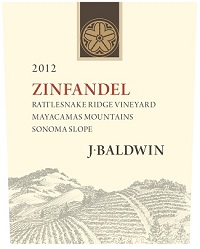 2012 Rattlesnake Ridge Zinfandel
2012 was such a pleasure for us in the cellar. After tough years in 2010-11, a normal growing season makes for a tasting and blending experience one looks forward to. This isn’t work. We used all five blocks: two Zinfandel clones, plus Petite Sirah, and we have the whole vineyard represented in its blackberry, blueberry, dark plum depth and complexity. Muted oak notes bring the fruit aroma forward. Petite Sirah is unmistakable when it’s poured into the glass. Its inky, dense, deep purple presence is like a Sumo wrestler at rest. You know it will be formidable. The 2012 edition is not as dense as 2008 or 2009, and Massimo and I decided to add 7% Zinfandel to add dimension. We’ve both been intrigued by the symbiosis of Zinfandel and Petite Sirah - now you can judge for yourself. It’s a moderate Petite Sirah, perhaps more toward a classical claret than a California monster. It’s still inky and dark with plum and blackberry flavors dominating. Still formidable.

The multidimensional fruit flavors and aromas make for a complex mouthful of flavor. As always, we have aged in used French oak barrels to provide structure without all those distracting new oak flavors. Blackberry and blueberry notes from Rattlesnake Ridge; cherries and more dark fruit from Dawn Hill and Haywood, plus a deep, mountain fullness from Topolos. Yum.

This vineyard near the southern tip of the Mayacamas is an integral part of the resurgence of Zinfandel in Sonoma Valley. Peter Haywood is the visionary who began planting about 100 acres of his 300 acre property in 1974.  We have chosen Zinfandel blocks that provide a complex cross section of fruit flavors. Aromas of Bing cherries and blackberries with a hint of blueberries overlay the distinctly lean dark fruit structure. 2012 was a warm year, producing bold flavors, which we augmented with 22 months in seasoned French oak barrels.

2012 was a warm summer, producing a bigger wine  reminiscent of the 2002 vintage at Dawn Hill, but the usual characteristic flavors of cherry, strawberries and the dark fruit elements remain. The grapes for this wine are dry-farmed without irrigation, and the vineyard is planted with a mixture of DuPratt and Deaver clones alongside who-knows-what in the classic field blend tradition.  Five percent of the vines are Petite Sirah, which is co-fermented with the Zinfandel, adding a rich texture and balance.

Our limited production 2012 Ratttlesnake Ridge Block 25 Zinfandel is planted to the DuPratt clone, which originates in a special part of Mendocino County, where it is own-rooted in sandy soil.  99% of vines in the world are grafted to phylloxera resistant rootstock, but sandy soil, like DuPratt Vineyard and the Sacramento River Delta, are not susceptible to the nasty little nematode at all.  So the typical rootstock/variety combination is avoided, and the varietal clone makes its own roots. This special cuvee has deep aromas of blueberry and spice and a velvet flavor core of blackberries with light tannins.

We changed the name, but not the idea. As before, this vintage is a blend of three Zinfandel clones from different vineyards in Sonoma Valley and Moon Mountain: our own Rattlesnake Ridge in the new Moon Mountain AVA, Topolos from Sonoma Mountain and Haywood Estate from the south end of the Mayacamas. The differences in elevation and the broad range of clones and microclimates make a complex blend of aromas and flavors.
Retail Price:  $28
Wine Club Price $23.80

Long time customers will recognize our tractor label, which was the second label of 2006.  When the wine in the bottle is so different from our single vineyard wines from prior years, we label them differently so we don't confuse drinkers' expectations.  This wine opens with cherry aromas and flavors before it reveals hints of blueberries. It's lighter body pairs well with turkey, chicken and other lighter meals.

This wine is substantially Petite Sirah. It's still a bit tannic and closed, so I recommend a lengthy breathing that will reveal concentrated plum and cassis aromas, followed by the deeper flavors of dark berries and the heavier body typical of the variety.   These wines are made from grapes from we have grown, but blended in different ways. They are somewhat lighter in style than our J.Baldwin wines, principally the result of the cooler growing season.

2010 Slater Zinfandel
Each of the four Zinfandel vineyards, plus some Mataro from Contra Costa county, in this year's Slater contributes its own flavor and complexity.  The mixture of clones, microclimates and elevation creates a rich Sonoma Valley Zinfandel, which was aged for 18 months in 2nd and 3rd year French oak barrels.  This classic Zinfandel shows light tannins, fruit notes of blackberry, cherry and cassis, with a dark berry.  Drink through 2018.

The cool growing season produced fresh flavors and aromas more reminiscent of the southern Rhone Valley, where the variety Durif originated.  Our 2010 crop was tiny, so enjoy the floral, blackberry aromas and the dense berry and plum flavors produced by the difficult growing season.  The aroma when the cork is pulled reminds me of walking through the winery soon after fermentation has completed.  Aged 18 months in 2nd and 3rd year French oak barrels.  This wine is so unique among my Petite Sirah wines that I'm not sure how long it will gracefully age.  The best advice is Hugh Johnson's:  "Buy a case and keep checking on it as the years go on."
Silver Medal at 2013 SF Chronicle Wine Competition
93 Points - Richard Jennings RJonWine.com via cellartracker.com
Retail Price:  $35.00
Wine Club Price $29.75
2010 Rattlesnake Ridge Zinfandel

The fruit at harvest looked very scrappy with sad little incomplete clusters.  The picking crew was given specific, detailed instructions to NOT pick any of the shriveled or unripe clusters.  The resulting crop was small, but it has produced a fresh, lighter Zinfandel with excellent dark berry and cherry flavors.  When I'm in the mood for a lighter dose of Zin, this is where I go.  Aged 18 months in 2nd and 3rd year French oak barrels.  Drink now through 2017 for these lighter flavors.

This is the second harvest of this vineyard. It is the first to include the DuPratt clone in the blend. Aged 21 months in French Oak, 20% new. The cool growing season produced a lean wine with very soft tannins, making the wine deceptively approachable. Black plums, licorice, a hint of cinnamon and a bit of Zinfandel spice.

This is an encore presentation of an opaque, ripe, tannic, classic Petite Sirah, despite the cool summer of 2009.Aromas and flavors of blackberry and plum dominate this edition.